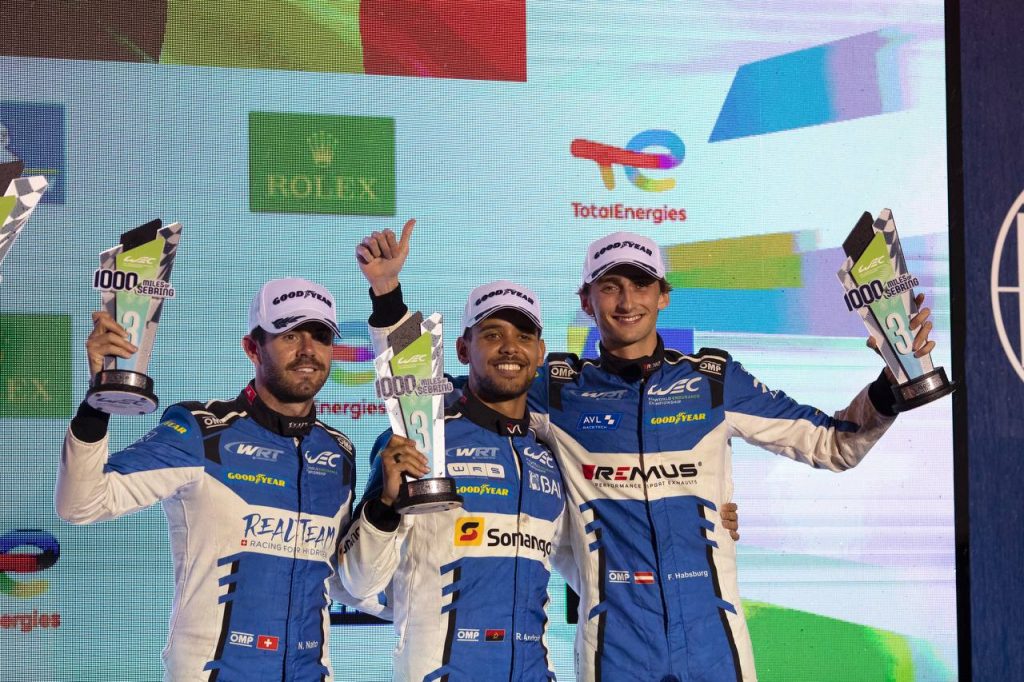 HABSBURG AND ANDRADE STORM TO THE PODIUM AT SEBRING

Bullet Athletes Ferdinand Habsburg and Rui Andrade continued their 2022 trophy haul at the Sebring International Raceway following their third-place finish at the Rolex 24 earlier this year, by claiming another P3 at the 1000 Miles of Sebring last weekend.

The FIA World Endurance Championship returned to its ‘American Home’, the Sebring International Raceway last weekend after a 2-year hiatus. The old-school circuit built on the grounds of a former WW2 airfield is famous for its bumpy surface, a unique mixture of the old concrete blocks and the new asphalt which is tough on cars and drivers. Combined with the extreme weather conditions it put Ferdinand and Rui to the test but both Bullet Athletes were relishing the challenge.

Ferdinand picked up right where he left off last year in Bahrain and went to the top of the charts in the first official practice session of the season. The REMUS Sport Exhaust sponsored driver was looking good for a front-row start in the qualifying session but due to a poorly timed yellow flag, he had to settle for fifth.

Rui was chosen to take the start. With only one year of experience in sports cars, he is still in the learning phase, but the young Angolan excelled in every challenge thrown his way in his first race weekend with the Swiss team.

The Sonangol – supported youngster made a clean start and settled into a good rhythm in P6, challenging ex F1-driver Felipe Nasr’s Team Penske Oreca for fifth place before passing the wheel to Ferdinand around the 2-hour mark. The Austrian driver got up to speed immediately and soon found himself in P4, closing on the Prema car ahead.

The first major interruption to the race came in lap 111 of the scheduled 268 when the overall leading Toyota suffered a heavy crash, and brought out the red flag. While the driver could, fortunately, walk away unscathed, the race was halted for 30-minutes.

After a stellar triple stint, Ferdinand handed over the #41 WRT Oreca to Norman a little over the halfway mark in fourth place. The Frenchman continued the charge and moved up to third place behind the sister car.

Ferdinand jumped back in the car entering the closing stages of the race and started to close the gap on second place but with two hours to go the skies turned grey and even though the rain stayed away, the threat of electric storms brought out the second red flag of the race due to the so-called ‘Eight-mile rule’ (When lightning is detected within the 8-mile radius of the racetrack, the race has to be suspended all participants, including team and track personnel have to seek shelter. The race can only resume 30 minutes after the last lightning strike in the area.)

Following a 30-minute full stop, the drivers were allowed back in the cars to resume the race behind the safety car with 44 minutes on the clock, but the green flag phase didn`t last long as the weather deteriorated, resulting in another red flag. After a brief break, the cars drove back to the race was officially finished with 25 minutes to go.

However the rather unusual ending prevented Ferdinand from fighting for the win, the #41 squad still delivered a third-place finish bringing home a decent haul of points in the opening round of the 6-race championship.

“It’s an excellent start to the season for the team, with P2 and P3, we take very heavy points. It’s been a strong race for us overall, despite the pressure. The competition is stronger than ever, but  Rui, Norman and the team held their ground. Of course, we wanted to win, and even though we couldn`t do it this time, we know we have the potential. I can’t wait to be back in May at Spa, one of my favourite tracks. with my fantastic partners REMUS Performance Sport Exhausts, AVL Racetech and Sanlas by my side”

I really enjoyed my first race with WRT. It’s such a professional and calm environment yet feels like a family immediately. It was a long and tough race and I’m happy we finished P3. The team and my teammates did a fantastic job, and it was a positive first time together. P2 and P3 is really good for the team and now we know where we can improve to be even more competitive. Thanks to my sponsors Sonangol and BAI for their support. We got off to a strong start and the best is yet to come.”

The FIA WEC season continues on the European continent on 5-7  May at the revamped Circuit de Spa Francorchamps.