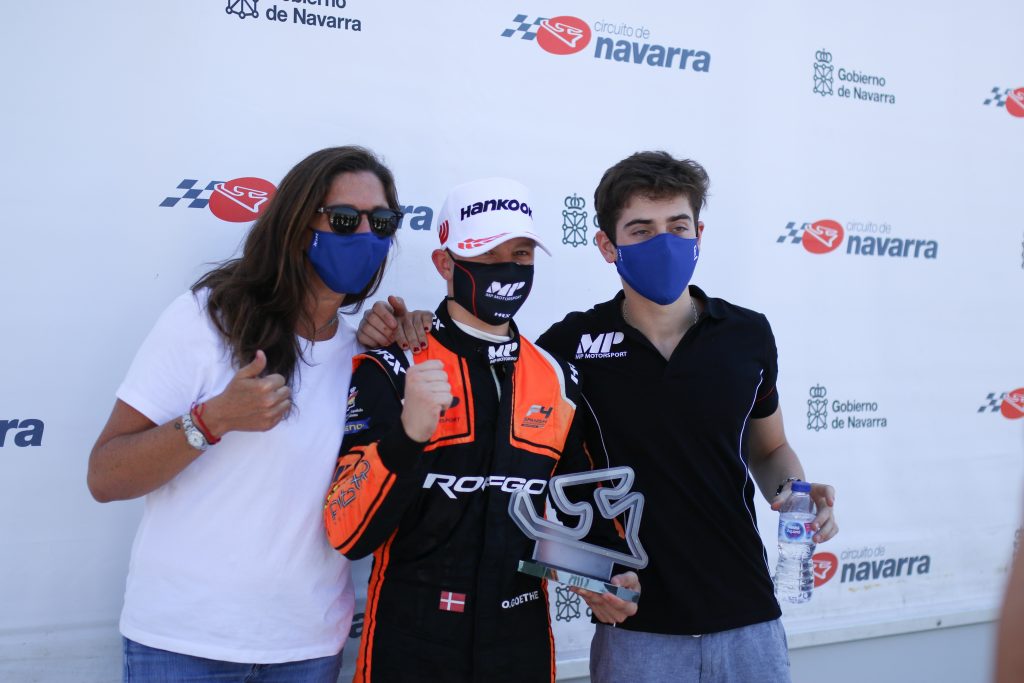 The ROFGO Junior supported driver Oliver Goethe leaves the opening round of the FIA Spanish F4 series with a hat-trick of podiums under his belt and sitting in second place in the competitive series, which was won by fellow Bullet Athlete Franco Colapinto last year.

Ollie, aged just 15-years old, joined 18 up-and-coming single seater stars from nine countries across four continents in the series that is well-known for producing some of the world’s top talent. To help him in his opening weekend, Bullet Sports Management sent Franco, who won the series by 119 points last year, to share his knowledge and experience.

After setting the pace in the practice sessions in the MP Motorsport F4 car, Ollie qualified inside the top-four for all three races and took two second place finishes and a third place at the Navarra circuit in northern Spain. This leaves the series rookie on 45 points just 20 behind the championship leader.

“Like anyone, I was a bit nervous going into a new championship and racing a new car – you don’t know where you are going to sit in the pack,” explained the ROFGO Junior driver. “But Bullet made me feel totally supported. Stuart has been a fantastic mentor and coach and having him there was great but it was also invaluable to have Franco there – his experience is so relevant. I’m happy with my opening weekend performance and I can’t wait to do it all again in round two.”

Franco added: “Ollie learned so quickly. We identified during practice that we should work on getting the most out of a new tyre and, with a few tips from my experience last year, he had it nailed by the end of the weekend. We also worked on race starts and by the third race of the weekend it was perfect. It’s good fun to work with someone who listens and improves like that. I can’t wait to help him further.”

Ollie, who graduated from karting at the end of 2019, and his older brother Benjamin, who is racing in GT World Challenge Europe, signed to Bullet in early 2020 in order to take their careers to the next level.

“The first weekend in a new car or series is critical,” explained Bullet Director Jamie Campbell-Walter. “It’s better to learn once and in the correct way than having to unlearn bad habits. This is why we gave full support to Ollie this weekend – it might look like overkill having Stuart and Franco there but you can see the strategy paid off. Ollie was like a sponge this weekend and really took advantage of all of the expertise on offer – he was rewarded with three fantastic results and well-positioned to be a contender for the championship title.”

The season has started well for the Bullet Athletes – Ferdinand Habsburg set the pace in the official DTM pre-season testing and Franco Colapinto took the Formula Renault Eurocup championship lead after the opening round in Monza last weekend.

The hard work continues for the Bullet team this weekend as three of its drivers head to Imola in Italy. In GT World Challenge Europe, Tom Onslow-Cole is in action with RAM Racing and Benji Goethe with WRT, while Franco Colapinto looks to take more races wins in Formula Renault Eurocup. While spectators are not permitted at the event, fans can watch the races at www.bulletsportsmanagement.com/live.